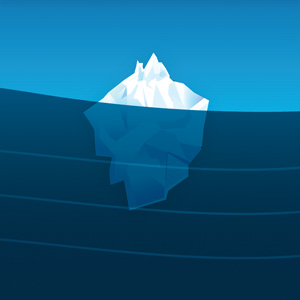 A Tangible User Interface is like an iceberg: there is a portion of the digital that emerges beyond the surface of the water - into the physical realm - so that we may interact directly with it.

In 1997, Hiroshi Ishii & Brygg Ulmer presented their vision of “Tangible Bits” at the CHI '97 conference. They proposed the concept of a Tangible User Interface (TUI), based on the physical embodiment of digital information and computation, in order to transcend the current dominant paradigm of “Painted Bits” or Graphical User Interfaces (GUI). Humans have evolved a heightened ability to sense and manipulate the physical world, yet the GUI based on intangible pixels takes little advantage of this capacity. The TUI builds upon our natural dexterity by embodying digital information in physical space. TUIs expand the affordances of physical objects, surfaces, and spaces so they can support direct engagement with the digital world.

Through designing a variety of TUIs, however, we have learned that they are limited by the rigidity of “atoms” in comparison with the fluidity of “bits.” TUIs have a limited ability to change the form or properties of physical objects in real-time. This constraint can make the physical state of TUIs inconsistent with underlying digital models.

To address this issue of inconsistency, we presented our new vision, which we call “Radical Atoms”, in 2012. Radical Atoms takes a leap beyond Tangible Bits by assuming a hypothetical generation of materials that can change form and appearance dynamically, becoming as reconfigurable as pixels on a screen.

Radical Atoms is a computationally transformable and reconfigurable material that is bidirectionally coupled with an underlying digital model (bits) so that dynamic changes in physical form can be reflected in digital states in real-time, and vice versa.

Radical Atoms are future materials that can transform their shape, conform to constraints, and inform the users of their affordances. Radical Atoms represent a vision for the future of Human-Material Interaction, in which all digital information has a physical manifestation so that we can interact directly with it. We no longer focus on designing the interface, but rather the material itself becomes the interface, which we refer to as a “Material User Interface (MUI).”

Looking back on the history of Human-Computer Interaction (HCI), we notice that quantum leaps have rarely resulted from studies on users’ needs; they have instead stemmed from the passion and dreams of visionaries like Dr. Douglas Engelbart. By looking beyond current limitations, we believe that vision-driven design is critical to foster these quantum leaps, while also complementing needs-driven and technology-driven design. From Tangible Bits, an early example of our vision-driven research, we shifted to Radical Atoms, which seeks out new guiding principles and concepts to view the world of bits and atoms in a new light, with the goal of trailblazing a new realm in interaction design.

From these three approaches in design research — technology-driven, needs-driven, and vision-driven — we focus on the vision-driven approach due to its lifespan. We know that technologies become obsolete in ~1 year, and users’ needs change quickly and dramatically in ~10 years. However, we believe that a clear vision can last beyond our lifespan. While it may be decades before atom hackers (such as material scientists or self-organizing nano-robot engineers) invent the necessary enabling technologies for Radical Atoms, the exploration of interaction design should begin today.